The boys and I were seriously ready for school holidays.
During the school holidays we take a break from written structured work, but learning is ALWAYS happening in our house.
Below are the photos that showcase the last two weeks.
We enjoyed a slower pace, relaxed our routine a bit, and just enjoyed some natural learning. 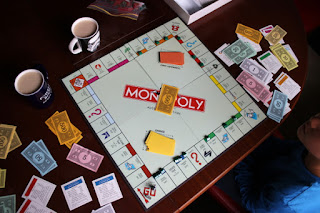 Each of the older boys attended a sports science event at the nuclear science centre. I had hubby take the child attending as well as the Munchkin so that I could have some one-on-one time with the child NOT attending.  The eldest and I enjoyed continuing our game of Monopoly during our two hours of time together. 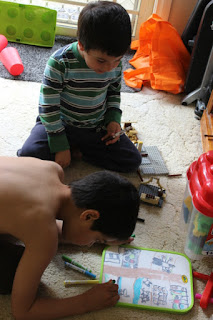 The Monster and the Munchkin enjoyed drawing their own Treehouse from the 13 Storey Treehouse books... 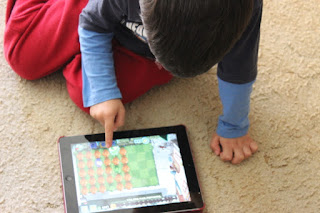 We always borrow an iPad from our local library and the boys enjoy a two week period of a bit extra screen time.  It is their only chance to play Minecraft and Plants vs. Zombies so they always look forward to this special time. 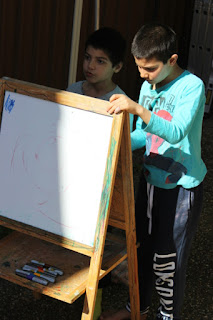 The weather was mostly wonderful so they spend an entire afternoon outside doing chalk drawings and white board drawings. 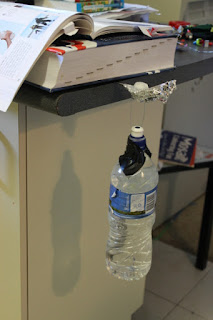 We attempted a science experiment - cutting an ice cube with wire.  It didn't exactly work, but we could see and understand the concept so I'll call it a win. 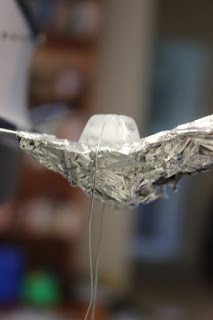 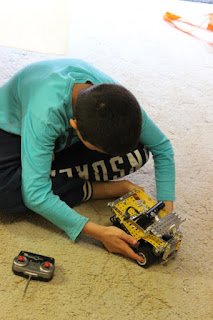 The two older boys spent one afternoon rigging up a camera on this remote control dump truck, turning the video mode on, driving the truck into the lounge room, and spying on the Munchkin, who was watching his favourite TV program - which they hate!! 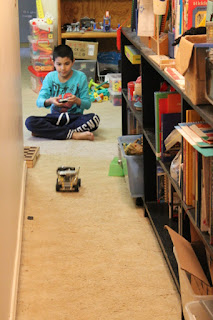 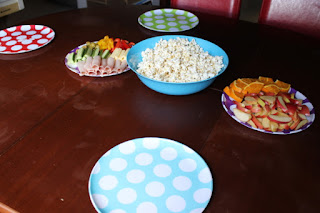 When they were busy creating and/or playing, lunch was a grab and go sort of affair. 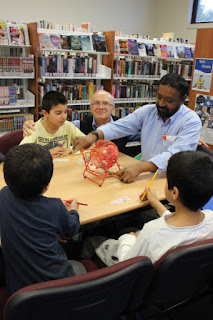 They decided to give Bingo a try again - even though Des no longer works. They decided it is okay as long as Jay and George run the program. Munchkin recognizes the numbers 0-9 now so as long as the librarian called out double digit numbers singly as well as together, he could play the game easily without much help!!
Example: "The next some is 80, that is 8 and 0, 80!" 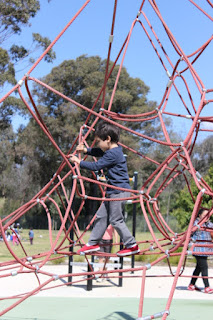 We braved our favourite park after Bingo, even though it is always a mad scene in the holidays, and played until we couldn't handle the crowds of people anymore. 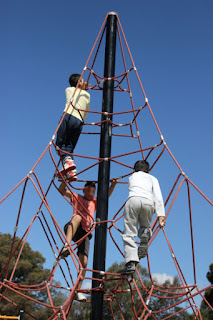 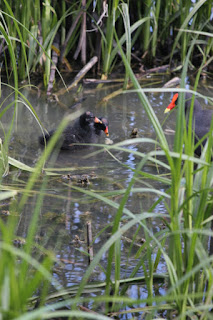 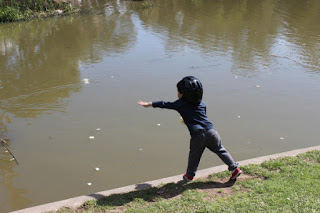 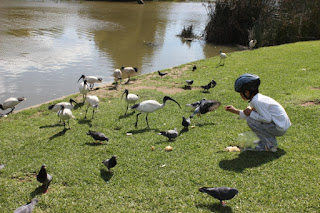 Then we moved on to a difference park, which was quieter, to feed the birds.  The boys were thrilled to find that the weird black birds we liked had babies (see top picture). Getting a good photo was difficult (even with my zoom lens) because the mother was extremely protective and acting aggressive if we got too close. 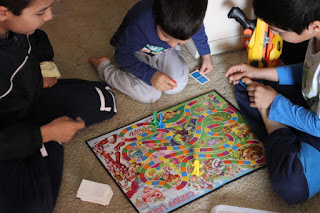 One of the rules I set in order to achieve screen time each day was to play a game with one or more brothers.  They enjoyed a couple of games of Candyland on this particular day. 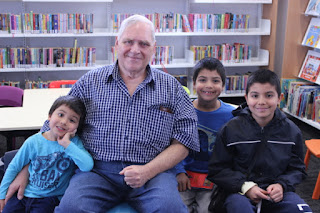 The library held a special morning tea for our favourite librarian (Des) to send him off to retirement.  Sadly he suffered a mild stroke followed by a fairly severe heart attack at the beginning of the year.  He is doing really, really well health wise, but decided it was time to retire and focus on health and home.  This was the first time we had seen him since January school holidays, and it was good for the boys to see him well and healthy. 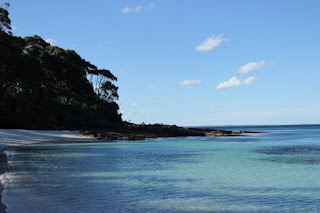 We took a family road trip down the south coast to see the whitest sand in the world. 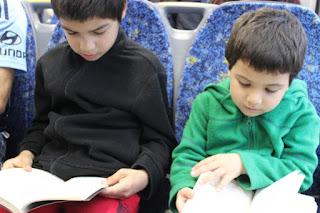 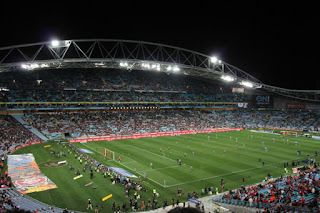 We finished off the holidays with the gift of family tickets to a soccer game (compliments of hubby's best friend).  There is NOTHING like a good book during a (longish) train ride (above photo) and it was a perfect evening for a soccer match.  It was a VERY late night (got home at midnight) but well worth it!

Independent selections for both Monster and Monkey.
Des tried to get them to read Beast Quest books AGES ago - and they have finally discovered them.  I'm just thankful that it happened when they can both read them independently.

Monster and I finished an Ancient Greek selection, and we all enjoyed the adaptation of The Three Little Pigs was hilarious.  All of us enjoyed it immensely and it was read and re-read before we finally returned it to the library.

OH NO! Little Dragon! is still a huge favourite of Munchkin's so we check it out whenever it is available at the library.  Being a Pig is Nice wasn't nearly as cute as I thought it would be.

Owl Babies is a cute little book about three baby owls who get worried and scared while their mother is out hunting one night, and Munchkin LOVES the Wombat books by Jackie French.

Finally, a VERY cute book illustrating the Australian version of the song.

We ALWAYS make time to read.
I would have to be on death's door before I would totally not read to the boys.
Our selection of books (both independent and read aloud) for the two weeks.
See under some of the books for further explanation.
Posted by LilPrecious at 4:40 PM