We are well and truly winding down our school year!
Somehow though, this means more photographs as we blend more natural learning/games/self-directed learning into our school days! 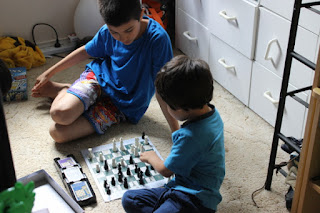 While I worked with Monkey on his written work (see photo below) Monster decided to work with Munchkin.  First they played a game of chess together.  Monster has this GREAT chess set that my step-mother gave him that gives options for an easier game (with hints and suggestions) as well as a tradition game. 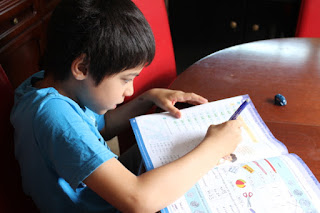 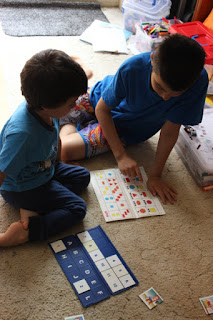 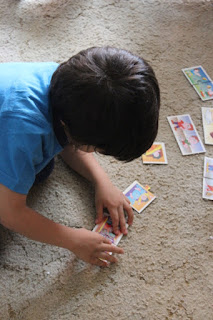 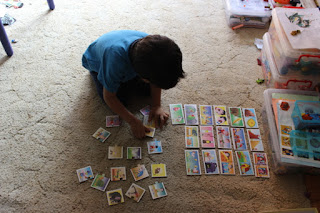 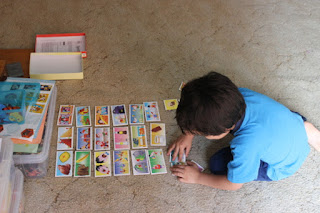 Munchkin enjoyed some opposites matching cards as part of his "learning activities" time. It turns out this game is really too easy for him, so after awhile I might pass it on to another homeschool family with a younger child. 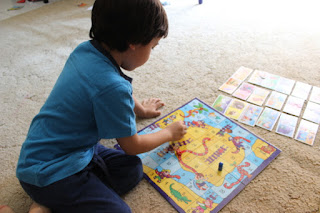 We enjoyed a super simple, but very fun, colour experiment with Skittles candy and warm water.  We only had a very small box of Skittles though so we already have plans to do this on a bigger plate when we get a bag!! 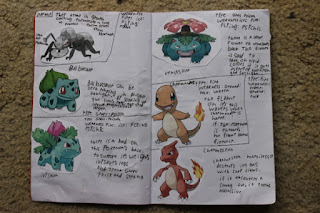 The two older boys have unknowingly created a wonderful learning experience for themselves. They are slightly obsessed with all things Pokemon at the moment.  They got a BRILLIANT idea to make their own Pokedex - which is basically just a book with all the Pokemon in it that they can use as a reference guide.  So as they request, I print out the images on my computer (since I have the colour printer), then they paste the pictures in their books, and use the laptop to research each Pokemon (on the website of course) and hand write all the information into their books.  This from my boys who HATE to write!!  HA!!  Huge win for me!!  The above photo is of Monkey's Pokedex book!  Hubby and I were amazed and impressed with his handwriting as well. 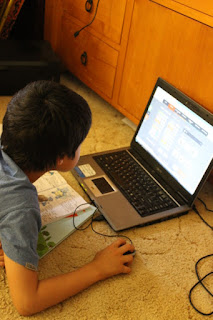 Monkey is busy researching the various Pokemon characters that he has added to his book. 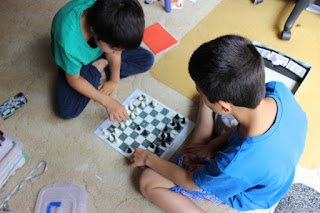 One afternoon Monkey and Monster played a few games of chess together. 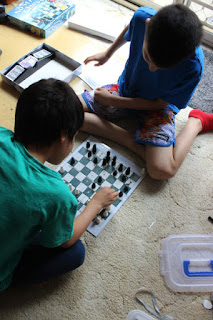 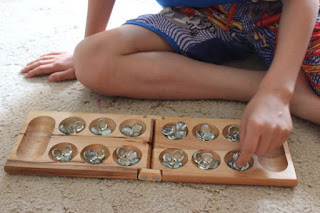 Several afternoons this week, Monster and I spent some time playing games together.
We LOVE Mancala (above photo). 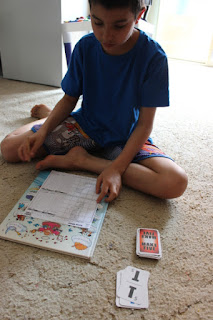 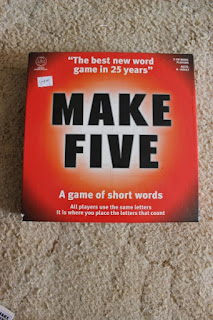 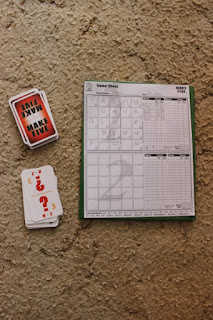 Then we gave this game a try that we found at the Salvation Army store awhile ago!  The idea is that you turn over the cards one at a time, each card has a letter, and you position each letter on your grid to create words.  Depending on the words you create and the point value of the letters, each person will come up with different scores for their words.  It is hard to explain here, but it is quite fun once you get the hang of it!! 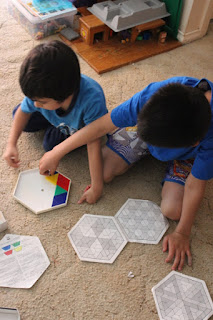 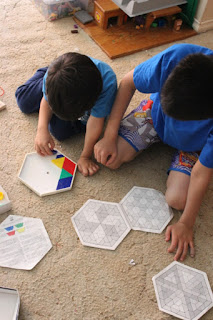 Monster agreed to give Munchkin some guidance and assistance with the Magic Mosaic set. Once Monster got him started Munchkin did a pretty good job, though his frustration would soar any time he accidentally bumped the plastic shape which would shift all the pieces. 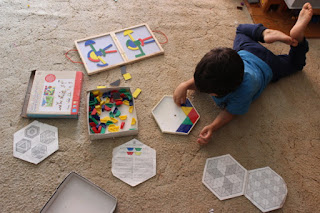 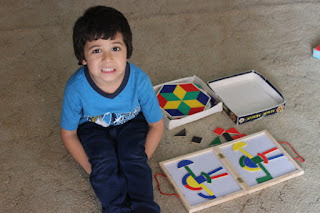 Posing with his finished product as well as his shape people that he created on his magnetic board.  Not sure what the facial expression is all about though. 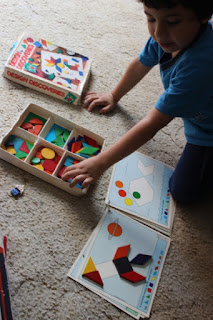 Self-directed learning ("free time") spent with the Design Discoveries game and some game he created involving stacking and knocking over a bunch of plastic drinking cups!! 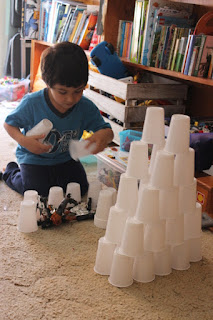 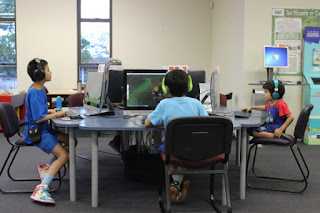 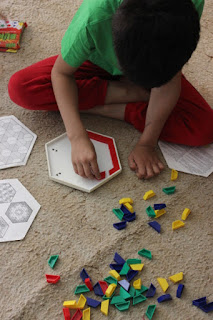 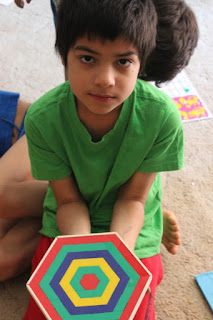 Monkey had a turn with the Magic Mosaic. 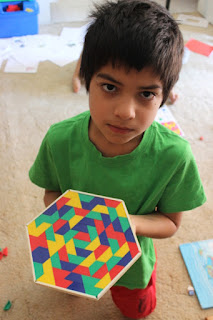 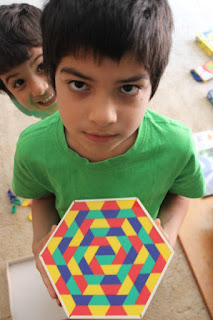 His finished designs.  He was very proud of these two in particular because they were his own created designs rather than any of the ones included with the game.

Our books for the week.
We LOVE these two books - one about a trio of baby owls waiting anxiously for their mother to return at night, and the other about baby Tawny Frogmouths, which are native Australian birds, who though nocturnal, are NOT owls!! 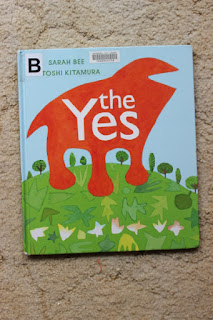 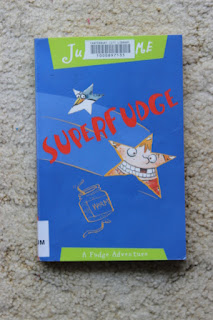 The Yes was a surprising book that had a deeper meaning than I was expecting. I actually want to read it by myself (rather than out loud to the boys) to absorb it a bit more.
Superfudge was Monkey's read aloud chapter book for the week and we LOVED it!

The Little Bad Wolf was a cute and quirky adaptation of Little Red Riding Hood and The Three Little Pigs.  Sock Monkey Rides Again is NOT a book I like (nor is it a quality book by any stretch of the imagination) but it is a fluff choice for Munchkin so I borrow it once in awhile. 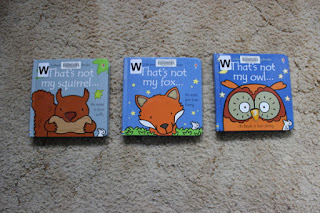 These little board books were a favourite of Munchkin's when he was MUCH younger so every once in awhile he goes through the board book section in the library and cleans them out!!

And it was a wombat week in our house!  EVERYONE, myself included, LOVES Jackie French!  She writes AMAZING picture books as well as wonderful chapter books for young adults and adults.  I got an EXCELLENT surprise when we arrived at the library as I discovered that her newest Matilda Saga book was waiting for me!!  HAPPY DAY!! 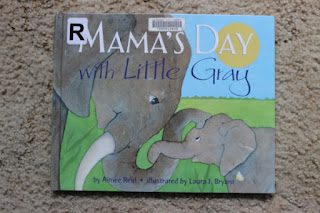 This is a beautiful book about a mother elephant and her baby and how they spend their day together.  I suspect Munchkin and I will read this numerous times before it is returned to the library.

Finally, I'm trying to start a little tradition of reading a Christmas book each day of the week. It probably won't happen as often on the weekends as we will have late nights the closer it gets to Christmas, but during the week it is fun to read them at bedtime.

Posted by LilPrecious at 5:54 PM