Term One: Week Seven ~ Getting Back Outside

FINALLY, two-thirds of the way through March, the weather has decided to cool down. We have had a WEIRD summer.  January was cool and we got stacks of rain and stormy weather, February was a mix of hot days and rain, and then suddenly, in March, when it is supposed to start cooling off, we got a stretch of muggy, hot, disgusting weather.  But now we have had some rain and a cool change has come through, and it is wonderful - primarily because it means the boys and I can get back outside!  So we started off first thing this week with a trip to the park in the afternoon.  They very quickly got bored with this park (admittedly the play equipment isn't the best for their ages anymore) but we spent over an hour outdoors including the walk there and back, and my ultimate goal is 1-2 hours per day, so WIN!!  Also they were able to go for a nature walk and another long (1 hour) play at the park close to our house on Wednesday afternoon/evening with their dad.  No pictures from that though as I stayed home and did some odd jobs around the house and enjoyed 90 minutes of peace and quiet.  Next week, weather permitting, I hope to get the boys outside EVERY day! 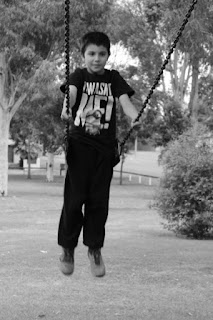 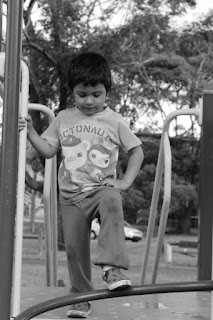 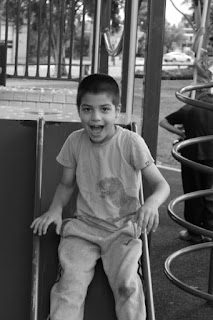 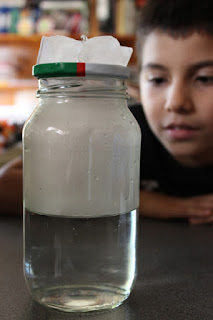 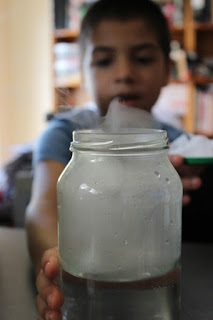 Tuesday afternoon was our science time - and this week I had two simple experiments planned to do with the water cycle.  The first (photos above) was to create a cloud in a jar. 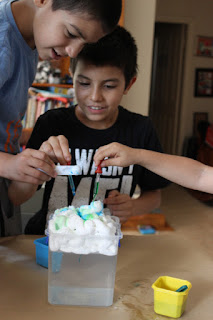 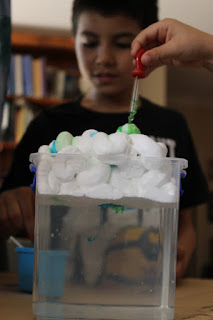 Our second experiment was to create/simulate a rain cloud.
It is easy to do this using shaving cream and food colouring mixed in water.
Simply drop spoonfuls or droppers full of the coloured water on the top of your shaving cream "cloud" and wait for the "rain" to begin to fall. 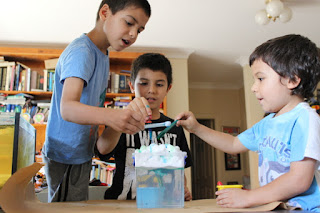 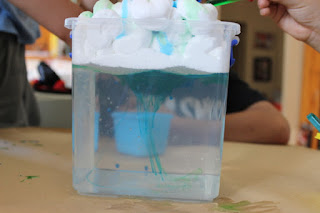 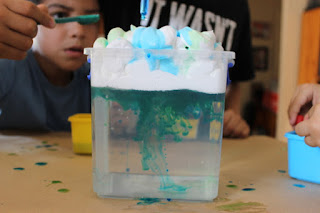 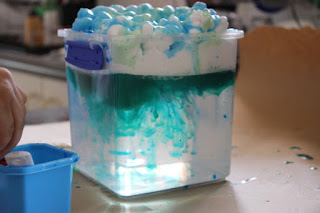 I have to admit that the "rain" is pretty cool.  The boys LOVED this experiment. 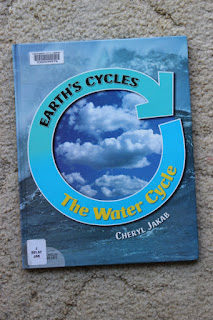 Following the experiment we read this book about the water cycle. 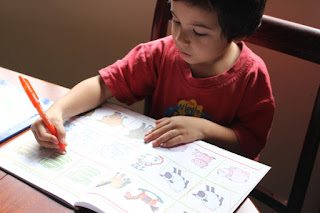 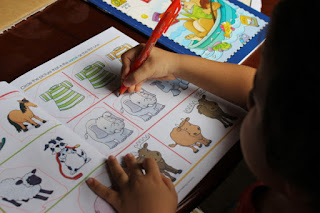 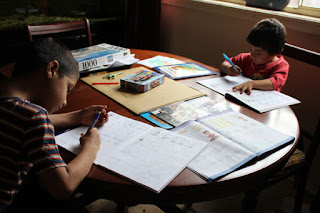 Several people have asked me how I "school" the older boys with Munchkin around.  This week I had the opportunity to photograph some of what he does.  I'm still working on planning appropriately for him and some weeks are better than others (and I've been pretty slack of late) but usually it works well.  It helps that he is child #3 and is used to amusing himself a lot.  This week was AWESOME because I found the preschool workbooks that I knew I had since he has been asking for a workbook of his own for a couple of weeks now.  He completed almost the entire book - he just kept turning to the next page.  The book focused on same and different as well as big and small and he simply had to circle the correct pictures.  The bottom picture shows how study time worked on this particular day.  Monkey was working on his handwriting, maths, and also read aloud an easy reader book to me, while Munchkin happily worked through his workbook.  I sat in the middle (the end of the table) and bounced like a ping pong ball between the two of them! ;-) 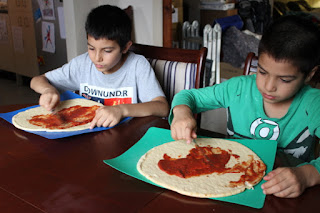 I spontaneously decided to create a life skills lesson for Friday evening.  I have started a theme of homemade pizza on Friday nights (quick and easy) and usually I prepare them while the boys watch their evening TV at 5pm.  But this time I decided they could make them, so I set everything up on the dining table and let them get to work. 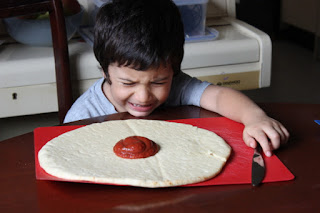 At first Munchkin was upset and frustrated as he didn't know how to get started, but after some reassurance he decided he could indeed give it a go. 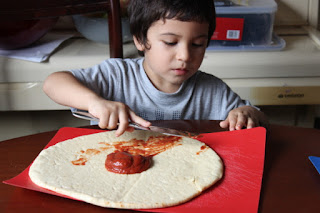 He managed to get the sauce spread around about 1/3 of the pizza base and I finished it off for him.  Putting the cheese on was a humorous display as he was literally putting it on one shred at a time.  Eventually his brothers and I were able to convince him that small handfuls would be good.  In the end, though he put some of the olives on, I completed his pizza or he might not have eaten until 8pm! 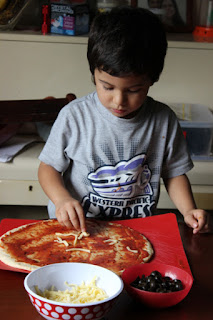 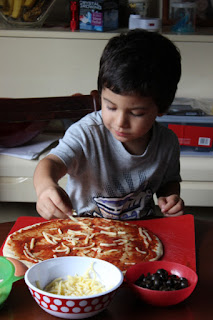 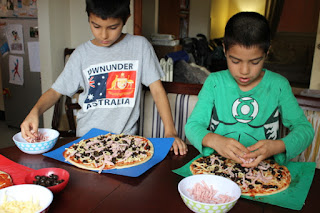 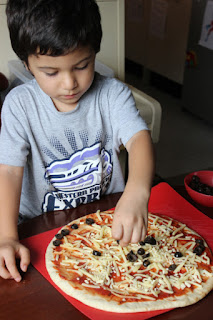 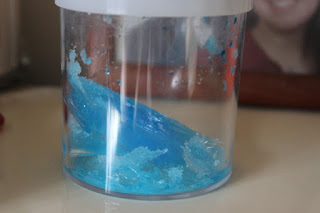 Some bonus science in the late afternoon on Friday.  Monster drained the chemicals from his crystal and rinsed it so we could admire it - and also so it would stop growing... and we made our own Lava Lamp though it didn't work out quite as I expected.  We used water soluable aspirin and I'm thinking Alka-Seltzer might have worked better. 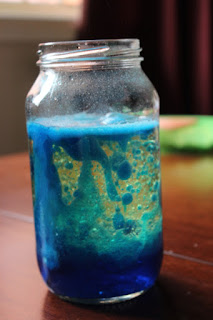 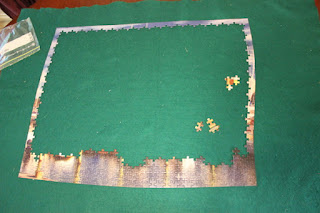 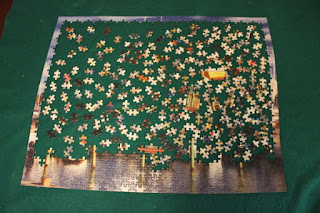 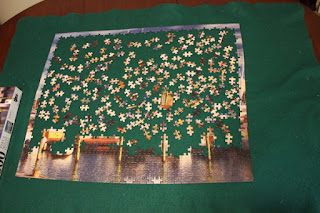 We had lots of fun with out puzzles this week.  Monster made GREAT progress on his and Monkey decided he wanted to do a puzzle as well.  Below is the 300 piece puzzle that he and I are working on together in the evenings. 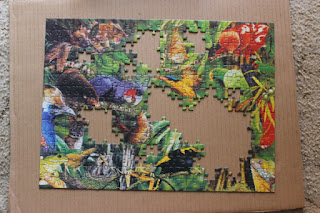 Finally our book selection for the week.  See comments below...

The books on the left are part of a lovely set about unconditional love.  The three books on the right are Munchkin's favourites for the week and they were read numerous times.

The wombat series is a cute set with lovely rhyming and great illustrations.  New Pamela Allen books are always exciting and this one didn't disappoint.  Munchkin loved it and enjoyed all the counting practice that can be included during the reading.  On the left are two books Monkey read aloud to me during the week.  Our library is slowly including more information books as part of their early reader selections and I'm ever so happy.  For those of you on Facebook I've posted an excellent article that addresses some of the reasons why boys don't like to read... one of which being that the selection of books available to boys is deplorable.

Left: Monster's independent book for the week - he LOVES the Horrible Science series.
Right: Another read aloud early reader for Monkey that was really too easy for him, but there is a rather big jump in the amount of text in blue level versus yellow level so once in awhile I let him take a break!

I'm not sure what the boys thought, but this Pamela Allen book (left) was a bit of a disappointment.  However, the new Jackie French picture book (right) was delightful and based on historical events and a story her grandmother told her.

The boys and I really liked all four of these remaining books.  Seaver the Weaver was about an orb weaving spider who built unusual shaped webs.  The Highway Rat was an excellent book, though I've never NOT liked a Julia Donaldson book,  based on The Highway Man. Finally, the last book was an Australian version of "Little Peter Rabbit Had a Fly Upon His Nose" and includes a CD with the song, sung by Colin Buchanan.