An interesting week. At one point I thought everything was going downhill. But when I stopped and looked at what was actually going on around me, I discovered that there was LOTS of good learning going on.
Sometimes it is hard to convince my "teacher brain" that learning can happen without workbooks, worksheets, and set learning times!
(As a side note, we did do set, structured learning times, using workbooks and worksheets, but they are not photographed as they were kept to the basics this week.) 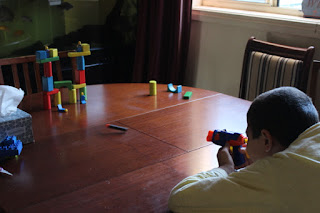 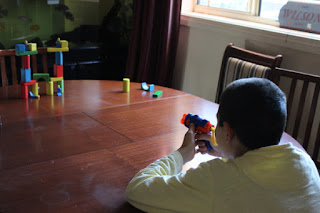 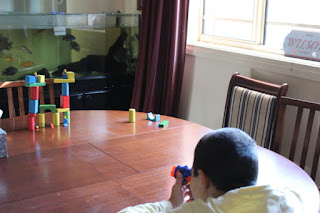 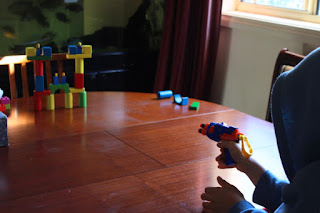 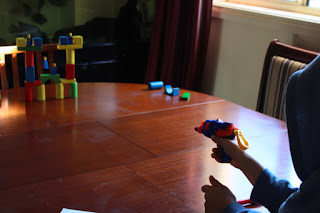 The boys enjoyed nearly half a day of "natural learning" on Tuesday. They had five minutes of "spare time" while I was getting things sorted to start written work, and all of a sudden I saw this.  They had taken the wooden blocks, some Lego mini figures, and the small Nerf gun, and created a homemade version of Angry Birds.  In addition to building the structures and knocking them down, they were also keeping a tally sheet of who knocked down each structure with the least number of shots, as well as total number of shots each person took for the whole playing time.  I simply could NOT interrupt this.  They created it, they were fully engaged in the activity, they were playing nicely, there were no screens involved, and there was NO fighting.  So I let it continue until they were tired (3-4 hours) and I spent the time catching up on homeschool paperwork. 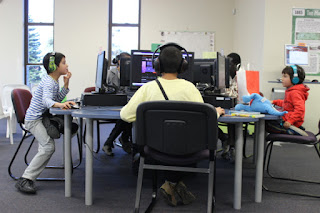 Thursday was our normal library day ~ but we discovered nothing was normal when we arrived at the library.  The entire children's section had been cleared out to make room for chairs as there was an author talk that evening.  It is times like this when I'm glad that they have screen time at the library... and they quickly settled to their computers and chose their games for the afternoon.
Meanwhile I wrangled with books... I returned all the books we were finished with and then got started on all the books that were waiting in the reserves section. 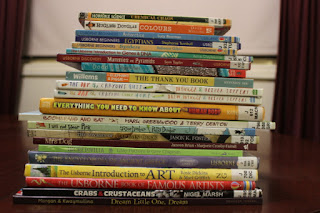 This was our general stack... some Usborne books I wanted to skim and have a look at for later learning opportunities, some new books that George (our lovely librarian) set aside for us, some old favourites that Daniel requested, and some more Horrible Science and Ancient Egypt books for Monster. 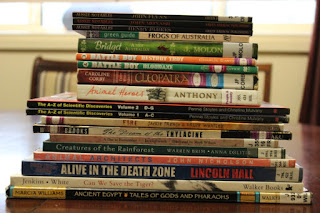 Our library holds two reading challenges each year that the boys take part in.
One is the summer reading challenge, which they love because there are fun little trinket prizes each week, and several years in a row now at least one of the boys has won the major prize (packs of books) at the end of the summer.  Oh, and one year Munchkin won the jelly bean contest as well...

The second reading challenge is the Premier's Reading Challenge, which is held from March to August each year.  The state government has compiled a list of books that they believe school students should be reading, so they set a challenge to encourage the students to actually read these books.  There are four age levels to the challenge (K-2, 3-4, 5-6, and 7-9) with different numbers of books that have to be read depending on the age. We first started participating in this challenge when Monster started Year 3 and we have enjoyed it more and more each year. You submit your book list online and receive a completion certificate each year.  If you complete the challenge every year from Year 3 until Year 9 then you receive a gold medal - this is the challenge Monster has set himself.  It is really becoming a challenge now too because now that he can only read from the 5-6 and the 7-9 lists the books (most of them) are harder and longer. I love this though because it challenges him to read above his age level (his reading level is well about his age level anyway) and it help him to learn time management as well.

These paragraphs are my long winded way of explaining that the above photo is a stack of some of the books I've put on reserve for Monster to read.  I'm not sure everything will interest him so he will sort through this stack, choose the ones he likes, and then we'll put more on reserve if need be.  He has 13 books to read in 12 weeks. 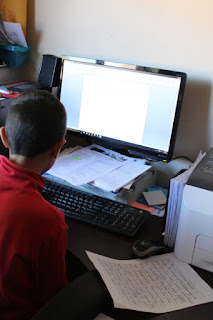 Finally we finish with photos of Monster working on his IEW writing.  I am SO VERY proud of him this week as he completed this task with minimal complaints.  There were a few grumbles about having to write (I expected those) but he is understanding and liking the process more so there were no issues similar to the issues he had when we worked on the previous paragraph. 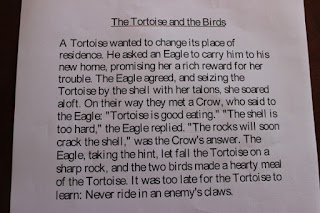 This is the original paragraph that Monster used. 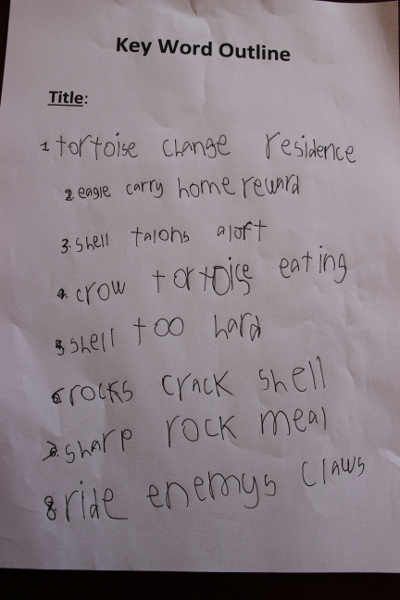 This is his key word outline.
Monster had to read through each sentence of the original paragraph and choose three key words that he felt were the most important part of the sentence. 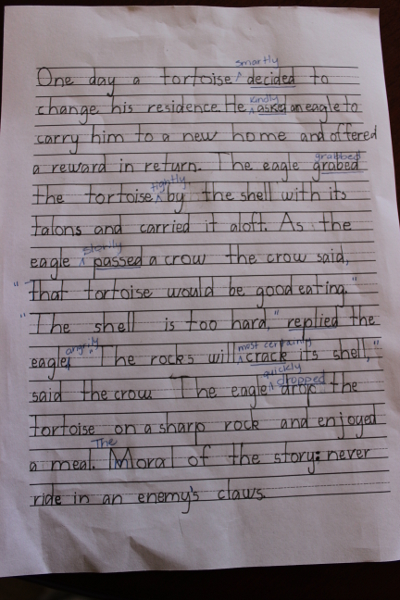 Once he finished his key word outline, we put away the original paragraph, and he got to work rewriting the story in his own words using his key word outline as reference.  Once he finished that, he and I sat down together, fixed any spelling and glaring grammatical errors, and he identified the verbs.  I supplied him with a list of adverbs and he began to "dress-up" his paragraph by adding several adverbs into his story. 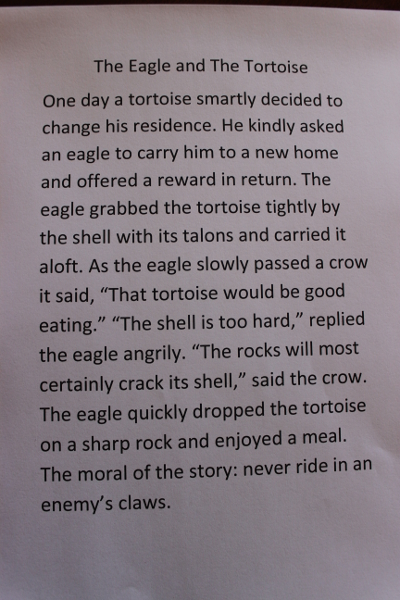 Finally he took the rough draft to the office and typed up a final draft on the computer.
We will do one more paragraph adding just adverbs and then we will start adding another another dress up. 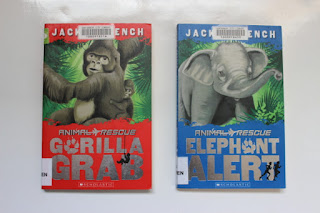 Finally our book selections for this week... we did a LOT of reading!!
For independent reading this week, Monster worked on these four books which complete his individual choices for the Premier's Reading Challenge. 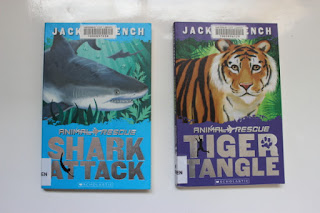 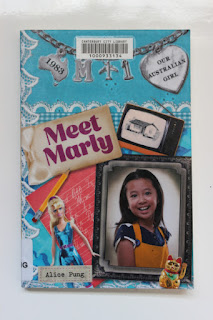 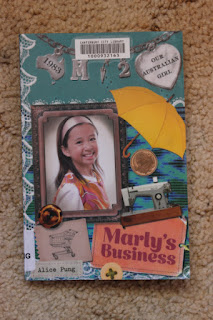 Monster and I worked through the last girl in the Our Australian Girl Series.

Some of the picture books we enjoyed this week... the particular favourite in this batch is definitely Zog which was read numerous times through the week. The bottom two in this section were new books George set aside for us and they were hilarious... the koala book is likely to become another favourite!

Our history and geography books for the week...

More new picture books that we hadn't read before... the Dr Seuss books left the boys wondering with the ending... if you haven't read it we highly recommend it.

We LOVE LOVE LOVE the Diary of a Wombat series so enjoyed both of these this week. 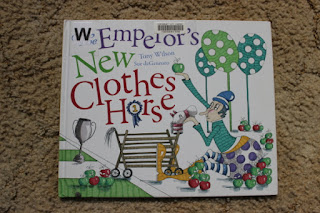 This was a lovely adaptation of the original and the boys found it so interesting I'll be reading the original to them next week.

Left: The Borrowers which I read aloud to Monkey - he is really enjoying this series. I had intended to read the Ramona series but they are packed away in a box somewhere and I can't seem to remember where I've put them.
Right: We completed our Grimm's Fairy Tales book we borrowed from the library.  These are the REAL fairy tales - you will have an eye opening experience if you read the real ones, they are NOTHING like the Disney adaptations. 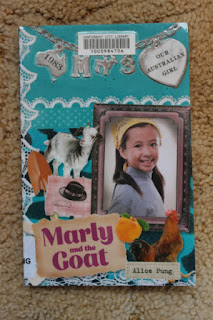 Monster and I read three of the four books from this series... we are still trying to track down the fourth one... I might have to try inter-library loan.

The general consensus from the three boys was that the book on the left wasn't all that exciting, but they LOVED the African adaptation of Little Red Riding Hood (right photo).

Splat the Cat is another favourite series... whenever we spot them in the library we grab them. 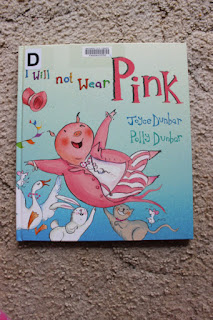 This is a new book that George put aside for us which at first glance I wasn't sure of, but when we read it we were pleasantly surprised... it was excellent and HILARIOUS!!

Last but certainly NOT least, two more all-time favourites!
Both read NUMEROUS times through the week and I was told emphatically NOT to return them to the library quite yet. 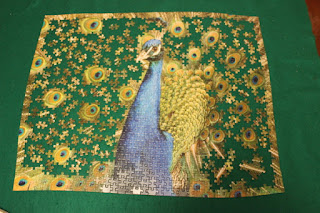 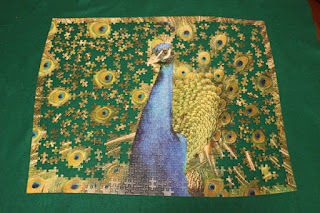 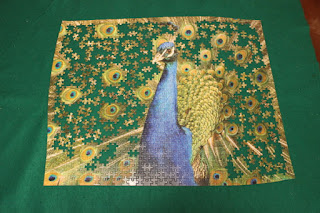 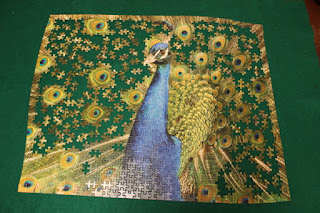 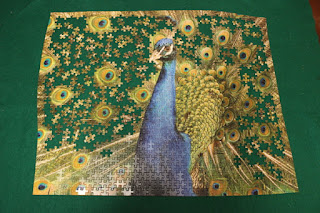 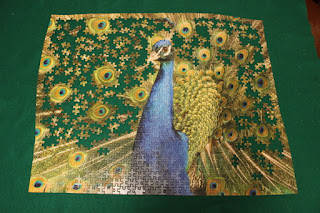 Monster's puzzle progress is slowly as he gets to the most difficult parts of this puzzle but it does show in these photos.  I am amazed with his ability when it comes to puzzles.  I wouldn't even consider attempting this puzzle, but he quite happily works on it for an hour every night and makes noticeable progress as well.  The only help I have given him is to sort the edge pieces from the middle pieces so that we don't waste his time with that chore.
Posted by LilPrecious at 2:55 PM